Previous Next
The three best beach towns in Alicante

When deciding the best destination to spend the summer holidays or that long weekend that is approaching, one of the main aspects that many people take into account are the attractiveness of the place.

For this reason, Alicante’s towns with beach have become one of the favourite options for both national and foreign tourists, as well as for our colleagues at Victoria Cars. Anyway, if you still don’t know which coastal town to visit, in the following lines we offer you some ideas.

Alicante stands out for being bathed by the wonderful and imposing Mediterranean Sea. However, this strategic geographical position would mean nothing if it did not have an optimal and sunny climate, at least, during almost every day of the year.

This area of the Valencian Community is visited by more than 7 million tourists every year, which makes it an international tourist destination of great prestige and popularity. As a result, more and more people are choosing this destination.

Altea, considered an unknown paradise of the Mediterranean Sea. This is no exaggeration, as this town in the province of Alicante is one of the most emblematic and captivating on the Costa Blanca.

The best thing about Altea is that, over the years, it has modernised to become a town that offers its visitors all the services they need to feel at home. However, it is not just a simple urban town. Not at all. Altea has been very careful in every way, and for this reason its growth and modernisation has been done while preserving its charm of a village on the shores of the Mediterranean Sea.

In Altea, you will be able to enjoy a historic quarter where you will not miss the little houses of design and old style, with white facades and adorned with colourful flowers, perfect for lovers of photography and those who value beautiful memories. The urban landscape of Altea’s old town has inspired dozens of artists from all over the world, and you will not be indifferent either.

Beyond its ancient architecture, bars, restaurants and sophisticated hotels, in Altea you can enjoy paradisiacal beaches such as Postiguet, Almadraba, San Juan, among others. These beaches in Altea offer tranquillity and a relaxing atmosphere, unlike the crowded beaches of Benidorm. 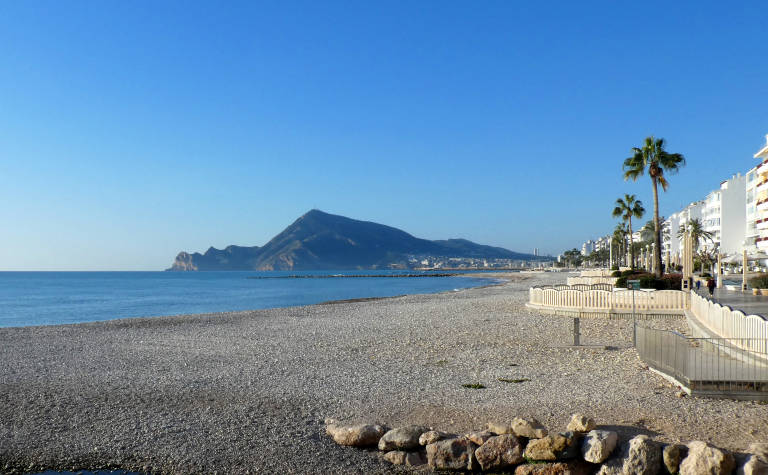 As you may know, the Iberian Peninsula is a popular destination for international tourists because of its natural beauty. However, those who think they have seen it all on the Costa Blanca are wrong. Mostly because the Mediterranean Sea gives life to many beautiful and captivating villages, as is the case of Moraira.

Moraira is one of the best beach towns in Alicante. Only 6 km away, tourists can enjoy the fine sand, crystal clear waters and exceptional climate for which the beaches of Moraira are so well known.

The town of Moraira is located 80 km from the city of Alicante and has around 8 km of coastline. It is also home to traditional Mediterranean architecture that enchants both national and international tourists.

However, in addition to its unforgettable architectural landscapes, Moraira is the tourist destination par excellence for water sports enthusiasts. Its extensive coastline allows the practice of numerous outdoor sports, such as paddle surfing, snorkelling, kayaking, and scuba diving among others. These are just some of the activities that we can offer at Victoria Cars.

Moraira and its beaches are always an excellent option if you want a more intimate and quiet atmosphere, which is rarely guaranteed by the most popular beaches in Alicante. On the other hand, it should be noted that its climate has an average temperature of 18 degrees, so you can visit any day of the year.

In the list of the best beach towns in Alicante, we must highlight Benissa, a very active and attractive town. Benissa is one of the favourite towns for tourists from all over the world. Although it is considered a town, Benissa preserves the charm that characterises the towns that border the Mediterranean Sea.

It also has 4 km of coastline with such crystal clear waters that scuba diving is one of the main water activities in the area, but what distinguishes this beach town in Alicante are the valleys and mountains that protect it.

If you visit Benissa on your next summer holiday you can enjoy both relaxing days on the sand in the sun and exciting hiking trails in the Sierra de Bernia mountain range. This is a mountain range with a height of 1,129 metres and a natural tunnel, through which you can see the landscapes of the Costa Blanca in Alicante.