The seven skyscraper in Benidorm – Skyline

Talking about Benidorm is, without a doubt, one of the major tourist destinations in Spain. A place where, curiously, not only do hundreds of thousands of Spanish tourists come every year, but also tourists from all over the world.

Perhaps for this reason, because of the great potential it has from the tourism point of view, many buildings have been constructed over the years. Buildings in the form of blocks of flats or hotels that have a common denominator that is no other than their incredible height.

So much that in these lines you will be able to find those seven constructions that for their height stand out in this town anchored in the province of Alicante.

Obviously, we will start with the highest building in Benidorm. The Intempo Building is 192 metres high, which is distributed over a total of 47 floors.

Located on Avenida Colombia, this building not only stands out for its height but also for being a real gem from an architectural point of view. Just look at the two twin towers that rise and are joined by an inverted cone whose base has an elliptical shape. 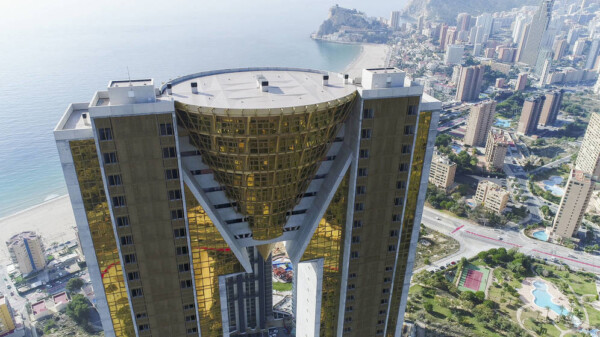 A classic. Without a doubt one of the benchmarks of Benidorm. This 186-metre hotel was built between 1987 and 2002. Such was the importance of this construction that in the year in which its work was completed, was the tallest building on the entire European continent.

In this luxury building, we can find 52 floors of which four are reserved to preserve various mechanisms. As a curious note, the initial plans for the Bali were different, as the plans were intended to make it taller, since an antenna was to be installed at its highest point, at 210 metres. 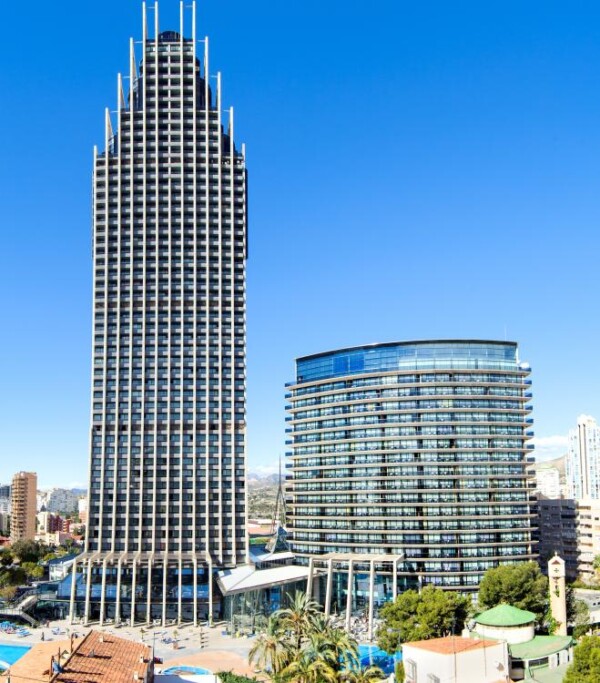 Located in the always busy Rincón de Loix, Torre Lúgano reaches a height of 158 metres. In this case we have to talk about the highest residence building in Spain. 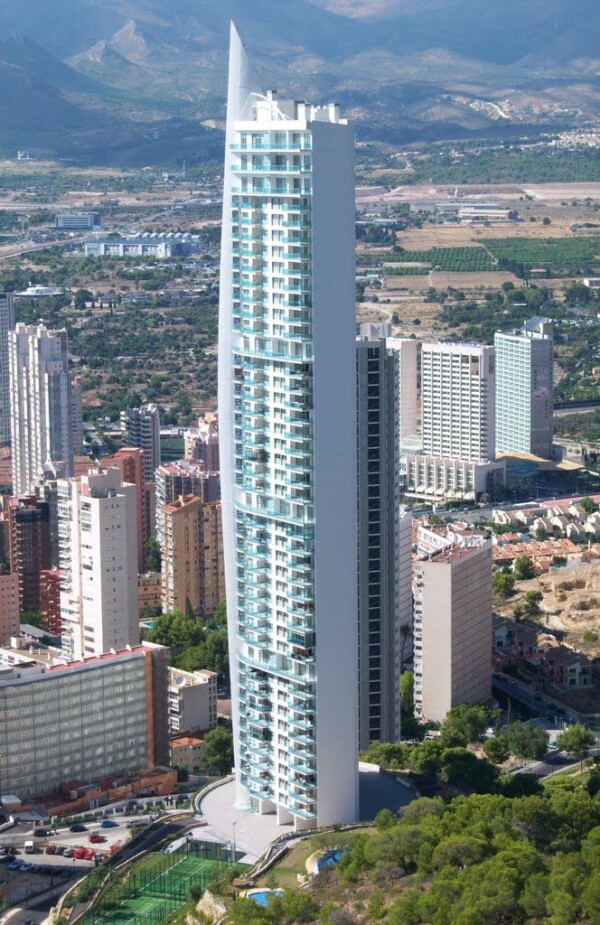 With such a singular name, we can find a building of brutalist style. With a height of 145 meters, this construction stands out above all for its infinite round forms. In fact, seen from a distance, this building looks like a huge cylinder.
To know the meaning of its name we have to go to the Basque language. Because of its height, they called it “the height of the city”. With 43 floors, it is worth pointing out that right on the 26th floor we can find a large swimming pool. 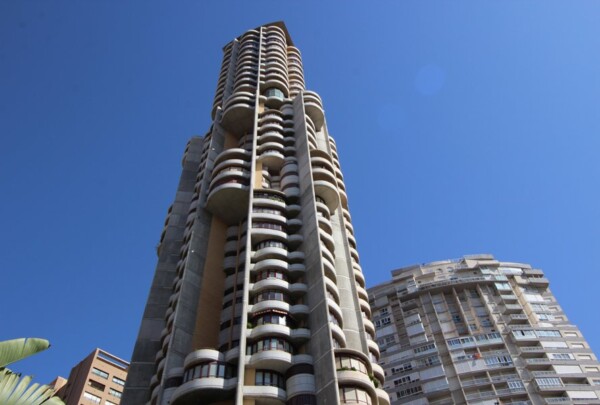 Right next to the Neguri Gane we can find this Kronos building. Located on Avenida del Municipi, this building rises to a total height of 145 metres, making it the fifth tallest building in Benidorm.

It is a residential building with 41 floors. However, not only the height is the most remarkable element of this Kronos building. You only have to look at all the green areas around it to realise that it has been designed so that families can find the perfect place to live.

A building with a great personality in which the immense glass terraces also stand out, giving it a very sober appearance. 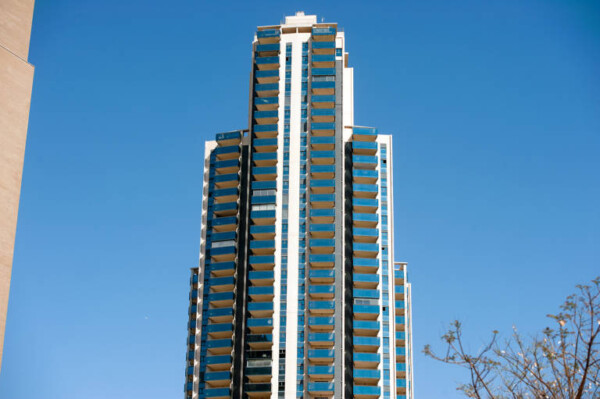 El Rincón de Loix is one of the places where these types of buildings stand out. Such is the fact that it is right there that you will find this building with a total high of 124 metres.

In this case, we find a very slender building on whose roof we can see an oval-shaped attic. A detail in which many have wanted to see a Ñ alluding to Spain.

Designed by the architects Nombela & Asociados, from this building we can have perfect views of the whole Levante beach. 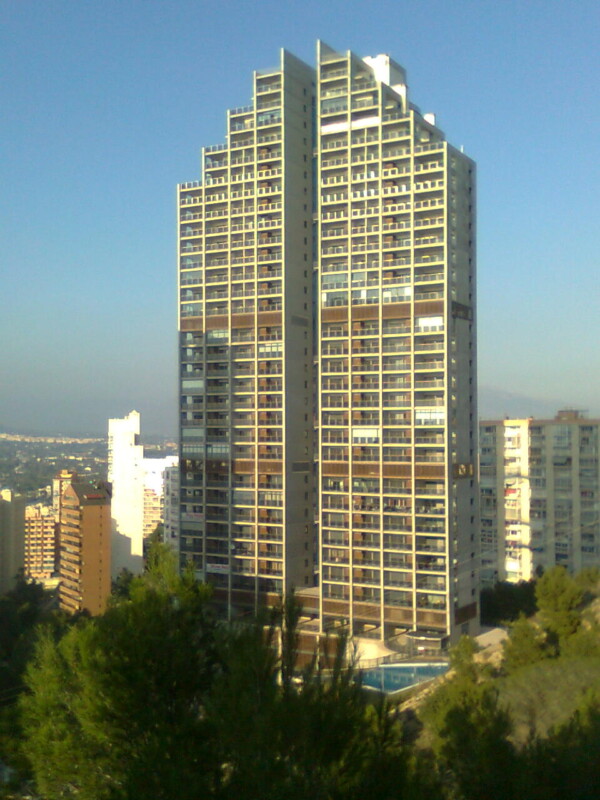 To finish this review of the highest buildings in Benidorm, we must talk about the Mirador del Mediterráneo. Anchored also in El Rincón de Loix this has a height of 123 meters forming together with the Don Jorge and the Torre Lugano a trio without equal.

As you may have guessed, its name is due to the exceptional views it offers of the Mediterranean Sea. Although there are slightly higher buildings, the truth is that the location of this is unique.

As far as the interior is concerned, we can say that it has 42 floors built, although 6 of them are currently being used as garages. The work was completed in 2006, and began in 2003. Even today, it is still very popular.

Of course, anyone who has visited Benidorm will have noticed that there are many more high-rise buildings to be found. A town that as a consequence of the expansion of the country several decades ago had no other alternative but to carry out vertical construction of large dimensions.

A good example are those we have reviewed in these lines although, as we say, there are others that are very worthy. A unique place, in short, where the rest, the good climate and the energy that its inhabitants give off are unparalleled anywhere else on the peninsula.

Alan Maclean
21:15 22 Feb 20
First expressions are everything. Honest Service. Rented for a week from calp office . There was no hidden rip off... fees which most tourists get stung by. Staff were friendly and made all clear . Even were good enough to drop car to hotel I was staying at (and picked up from) that saved me wasting any precious holiday time. Would reccomend and I'm sure i will use again. Thank you. ;) Aleer más

Svetlana Kukobat
14:11 14 Jan 20
We have a great experience with this company, everything that we asked we got if we come again to Spain we will book... Victoria Car.leer más

Tom Veitch
16:30 08 Jan 20
I've been renting cars in Spain for years and Victoria Cars has been the best experience...Reasonable prices, reliable... cars, no rip off rental tricks as petrol is full to full, minimum time from entering office to driving off. Wish the whole industry learnt from the Victoria Cars service.leer más

Michelle Powels
20:40 19 Oct 19
Excellent service. Car was delivered to the hotel with no extra charge and with full insurance.
Siguientes