Enjoy the Fallas of Valencia, Intangible Heritage of Humanity

Previous Next
Enjoy the Fallas of Valencia, Intangible Heritage of Humanity

Enjoy the Fallas of Valencia, Intangible Heritage of Humanity 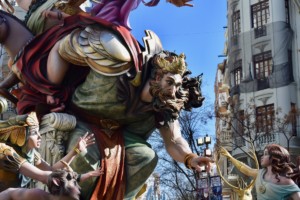 During the first 19 days of March each year, the region of Valencia and especially the capital of the Turia are dedicated to the celebration of the Fallas. It is a festival that combines satire, celebration and art that you have no reason to miss.

Thousands of people put all their effort and passion into making sure that everyone enjoys the fire and the fun for more than half a month.

How the Fallas began.

It is a festival that has its origins in the ancient customs of the carpenters, who on the night of March 19 burned the pieces of wood -parts- that they used to raise the lamps that illuminate them during the winter.

With the passing of time, things have been added until they became ninots. Nowadays they have a very critical sense, usually using politicians or celebrities ironizing different acts they have done throughout the year. For this and due to the sponsors, both companies and individuals, they have budgets of several millions.

Although the most important days of the Fallas are from 14 to 19 March, the truth is that the festivities begin on the last Sunday of February with La Cridá. It is the most awaited day of the year for all the Falleros.

After walking around the streets all day warning of the beginning of the Fallas, the Falleros gather at the foot of the Serrano Towers to listen to the Mayor and the Falleras Mayores’ speech. This is the moment in which the starting gun is fired after almost a month of celebration, gunpowder and light.

This is the event that marks the beginning of Fallas Week. After a year of intense preparations to be the best Falla, it’s time to prove it. All the monuments must be ready by March 15th at the latest. From this moment on, the Central Fallera Committee will visit each one of the monuments and then reward the best one.

It’s another of the magic moments of the Fallas. They are incredible light shows and one of the main attractions of the Fallas. Every visitor can enjoy it in a wide variety of ways in the different streets.

The smell of gunpowder, the noise and the fun make it enjoyable every day by the geography of the whole city. Thousands of tourists and Valencians crowd into one of the most characteristic events of these festivals.

Throughout the city of Valencia, as in all the towns of the region, it is a real pride to exhibit these masterpieces. They are characterized by their critical style with the current society. Among many others, politicians, film characters, children’s drawings and of course various situations that have influenced our daily lives throughout the year have been satirized.

Among all of them, the Ninot Indultat de las llamas del fuego will be chosen to be exhibited at the Prince Felipe Museum.

As it could not be otherwise, the Festival will end on March 19th with the burning of all the monuments after a year of intense work. It is an act where the falleros will shed many tears, both of joy for the work done and of sadness because it ends and will lead to the preparations for the next Fallas. 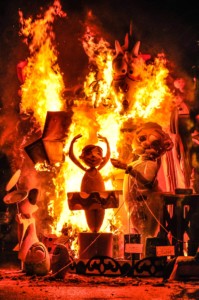 How to get to the Fallas

Whether you are passing through or if you are from Valencia and want to go to Las Fallas and do not have a means of transport, Victoria Rent a Car offers you a whole range of vehicles. You can hire a car rental service in Calpe or if you prefer a home delivery car rental. If you arrive by plane you can rent a car at Alicante Airport at a very economical price with everything included.

This way you have the possibility to visit any Falla in the Valencian Community, whatever the town is. Whether you want to hire a car in Calpe or a car rental in Alicante Airport Victoria Rent a Car is your best ally. The low prices with all included makes you only have to worry about enjoying this magnificent party.