Alicante, a land with a lot of history

Previous Next
Alicante, a land with a lot of history

A day trip to Alicante, a land with a lot of history

If you are looking for a quiet and sunny place, with the comforts of a big city and the most beautiful beaches of the province, you may have to think to put your bags in the car and head to the city of Alicante, capital of the province that bears his name.

Alicante is a large city located in the south of the Valencian Community and caressed by the warm waters of the Mediterranean Sea. It is home to more than 300,000 people, making it the most populated municipality in the autonomous community.

It also has one of the most important airports in Spain, Elche-Alicante airport, which every year receives millions of tourists who want to spend their holidays near the sea. Obviously, with these characteristics it is not surprising that it has a wide range of tourist activities and services. To get there from the airport, just take the N-338 road and follow the signs to “Alicante” which will eventually take you along the N-332. In a few minutes, you will have reached one of the most welcoming cities on the east coast of Spain.

What to see in Alicante? 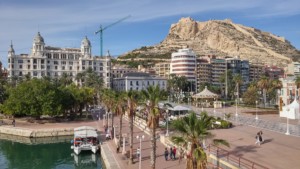 What is most striking when we first arrive in Alicante is the imposing Castle of Santa Barbara, built in the 19th century on the highest part of Mount Benacantil. After climbing a few metres, from the top you can see all the beaches and the Island of Tabarca from a different point of view. We will be delighted by the sound of the breezes brushing the pines of the parade ground, or the seagulls squawking on the battlements. This fortress, which was originally Arabic, is now also a museum where everyone can discover the life of those who occupied it for centuries.

When we come down from Alicante on the side opposite the sea, we will find ourselves face to face with the Central Market, a building decorated in a very interesting and at the same time extravagant way, with clear Valencian style ornaments, built at the beginning of the last century. Furthermore, it is one of the relics rescued from the Spanish Civil War, given that in 1938 it was bombed by surprise by the Italian air force from Mallorca. This unique building continues to serve as a meeting place for buyers and sellers of all kinds of products. Inside you can find everything from meat and dairy products to fish, sweets and newspapers. Without a doubt, it is the perfect place if we want to taste the best delicacies of the province.

The peculiar Mediterranean style of the villages in the province of Alicante is unrivalled, with its narrow, steep medieval streets, ancient chapels and small squares surrounded by ancient buildings. Its capital was not going to be different, and this is demonstrated by the Santa Creu district, located in the hills of Mount Benacantil. This is the old district of Alicante where you can find the most emblematic buildings such as the cathedral of San Nicolás, from the 17th century, the town hall, the medieval walls and the two most important museums of the city. It also has restaurants, pubs and ice-cream parlours, which make it the perfect place for a quiet walk in the afternoon.

This is the jewel of the old town, built in the 17th century on the site of a mosque, and in the Renaissance style. It is currently presided over by the Abad Penalva square, where a mass and procession is held every 6th December in honour of its title of Concathedral.

It is the reference point for measuring the altitude above sea level of any place in Spain. It is a baroque style building built in the 18th century, also known as the Municipal Palace of Alicante and where the municipal sessions are held.

It is the headquarters of the Provincial Council of Alicante. If you do not like politics, that is no problem. You just have to walk around and will be enchanted by this neoclassical style building built at the beginning of the last century.

Commonly known as the MARQ, it is the museum of Iberian, Roman and medieval culture par excellence in Alicante. It also has temporary exhibition areas where everyone can discover other cultures and civilizations in each season.

These ruins belong to a 4th century BC Iberian-Roman city located in the area of El Tossal, north of the city of Alicante. It was such an important find for the people of Alicante that many companies and sports clubs bear its name. The remains of the wall, the pre-Roman defensive towers, the thermal baths, the forum and the Muslim necropolis stand out in an archaeological site.

Like any good Spanish metropolis, Alicante does not lack its theatre, an intimidating neo-classical building built in the 19th century. On its stage, we can enjoy the wide range of shows, theatres, operas and concerts performed by artists from all over the world.

Located in the centre of the city, it is a centuries-old building that can hold up to 16,000 spectators. It is said that the first bullfight was held in 1700. If you do not like bullfighting, that is OK, apart from its bullfighting activity, this square also serves as a stage for concerts, rallies and sporting events.

It is a historic building located on the promenade of the port of Alicante. Was built in 1917 next to the port works in a classic and oriental style. Nowadays, its interior no longer smells of fish, but has been restored as an exhibition hall that has hosted numerous art exhibitions and cultural activities.

In this enclave of the Mediterranean Sea, we can find diverse commercial activities, as well as trips in boat until the island of Tabarca. However, the most interesting thing is its long walk, through which we will be able to appreciate many charming places, as well as the many handicraft stands where ceramic, textile and other products are sold as souvenirs. In addition, we can appreciate the modernist architecture of some buildings and luxury hotels, as well as enjoy a traditional Mediterranean menu in its many restaurants overlooking the sea.

This island is about twenty kilometres from the city of Alicante, and to get there you will have to take one of the boats that will not be waiting in the port. It is the largest island in the Valencian Community and the only one inhabited with no less than fifty inhabitants. As soon as we disembark, we will be able to notice the calm that is breathed in the place, in addition the Lighthouse of Tabarca will call our attention, an abandoned construction that centuries ago served as a school of lighthouse keepers.

Tabarca is a mine of Greek and Roman relics, as well as medieval shipwrecks. Charles III used it as a prison for his prisoners, a use of which there is still a fortress and a strong wall. Inside the village, we can find historical buildings such as the Church of St. Peter and St. Paul, the quarry, the Governor’s house or the different entrance gates of the wall. Tabarca is so small that it can be visited in one day. In addition, if we get tired of so much walking, we can always relax in one of its coves or sunbathe on its main beach.

This charming baroque style temple is located 5km north of the city. To do so, take the AP-7 motorway and follow the signs until you can exit at Santa Faz. The monastery is located in the centre of a small village called Santa Faz, where every year at Easter there is a massive pilgrimage that leaves from the Cathedral of Nicolás to conclude at this place.

What to eat in Alicante

One of the most important details of our trip is the gastronomy. As it cannot be any other way, Alicante’s gastronomy has very rich and varied dishes based on the Mediterranean diet.

It is one of the best known dishes for visitors, being an exquisite dish of rice with cuttlefish, squid, prawns, carabineros, prawns and of course homemade fish stock.

It is a very typical dish of Alicante’s gastronomy, although we can find it all over the Valencian Community, Murcia and Andalusia. Its preparation is as simple as it is delicious. It consists of salting slices of red tuna and then washing and drying them.

A stew, served rather on cold days, very easy to prepare. It is made with rice, vegetables, legumes, pork ribs and bacon among other ingredients.

Of course, there are an infinite number of dishes to try on our trip to Alicante. For this reason, we will leave ourselves in the hands of the professionals of the hotel and catering industry and their recommendations, as we will find a great variety of all kinds of restaurants.

How to get to Alicante and move around the city

To get around the city, all you have to do is carry a bottle of water, especially if you are going in summer, and start walking. However, as you will have noticed, many of the city’s places of interest are several kilometres away from the town centre, so it is advisable to have some kind of transport to save time and blisters on your feet.

That is why Victoria Rent a Car offers its clients a wide range of manual and automatic vehicles with which they can move freely around the capital of Alicante and, why not, also around the many villages, ruins and valleys that make up the magnificent land of the province.

We can rent a car at Alicante Airport at an economic price and at the same time with full insurance included in the price.