7 things to visit in Villajoyosa

Alicante is one of the most popular regions in Spain mainly because of the great diversity of tourist attractions that we can find in this Valencian province.

As the capital of the Marina Baixa region, Villajoyosa is one of the most important towns on the Costa Blanca. A town where we can rest and connect with everything that surrounds us since it is not characterized, precisely because of what is known as mass tourism.

It is precisely for this reason that it can be very interesting to have an itinerary at hand with which to visit some of the most unique places in this region.

A tour of Villajoyosa’s historic centre and its colourful houses

The Old Town is one of the first places we recommend in Victoria Cars to visit in Villajoyosa. It is one of the highest parts of the municipality, as it is located on a hill that allows you to enjoy beautiful panoramic views.

The main features of Villajoyosa’s Old Town include its cobbled streets, large historic buildings such as the Church-fortress of Asunción and the Town Hall. Its great historical value as an old walled town has made the Old Town a National Historic-Artistic Site and a Site of Cultural Interest (BIC).

On the other hand, one of the most emblematic features of the town is its colourful hanging houses, located in the centre of the town. A great spectacle of colours that we can appreciate while we take a small walk along the Amadorio River. 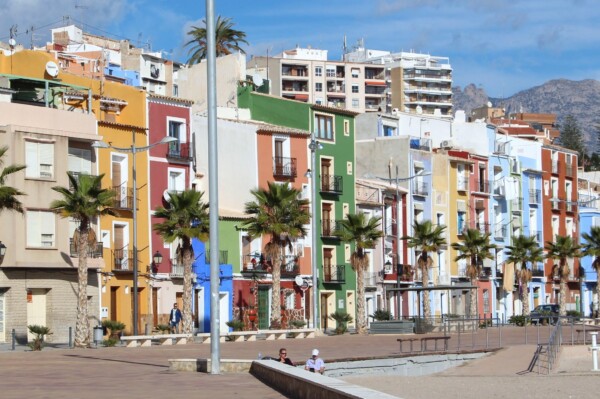 One of the points that we should include in our list of places to visit in Villajoyosa is El Torres beach, as well as the Sant Josep’s tower. It is a beautiful beach where we can enjoy great tranquillity, as it is a little bit away from the town centre.

If we want to have a little more privacy and live a much more relaxing experience, El Torres beach is one of the best options we can find in Villajoyosa. Also, despite its location and the minimal amount of visitors, getting to the beach is very easy.

By car, it can only take a few minutes and it is possible to find a good parking. And, we cannot miss Sant Josep`s tower. A funeral monument near the beach that has been declared an Asset of Cultural Interest. 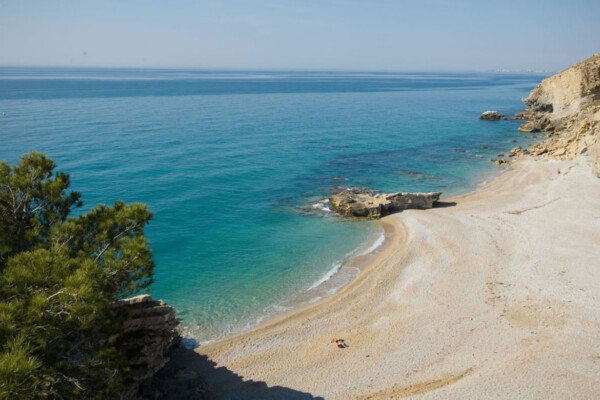 Enjoy the view of the Amadorio River

Another place not to be missed in Villajoyosa is the large artificial lake that runs along the course of the River Amadorio. This is one of the most impressive places in the municipality and can easily be found on the route to the town of Orxeta.

It is worth noting that the river has a marshy area that can be crossed thanks to a small path that is available to us. In addition to enjoying this beautiful picture, we have the possibility of fishing on the riverbank. In particular we have to say that we have met some Carp, because it is the most common and abundant fish in the region. If we are lucky, we can return to the village with a small fishing reward! 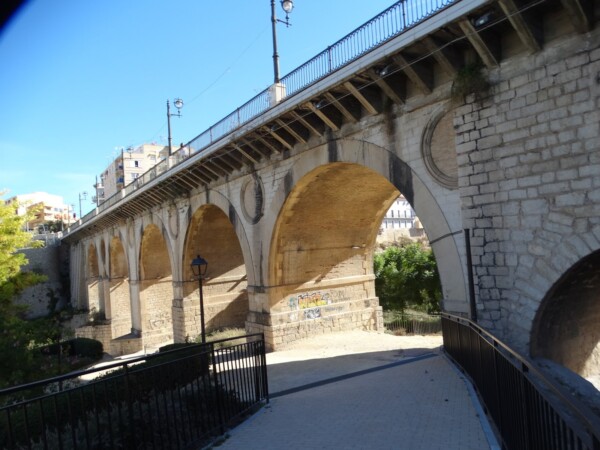 One of the most visited places by tourists who go on holiday to Villajoyosa is the Tossal de la Malladeta. An ancient Iberian sanctuary can be found to the south of the town centre.

There, we can not only appreciate the sanctuary built between 375 B.C. and 350 B.C. We also have the possibility of visiting the Mason’s Palace built at the beginning of the 20th century.

Together with this, after visiting the Iberian sanctuary built in honour of the Goddess Mars, we can enjoy an incredible view of the town and the Mediterranean coast. It is an option with a great accessibility that is in the vicinity of Paradise Beach 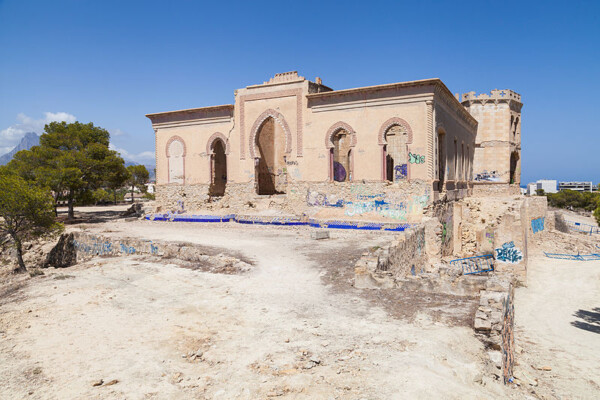 Visiting the Chocolate Museum and the company Valor is one of the points to mark in our itinerary. This Alicante municipality is characterised by having several production centres specialised in the production of sweets from cocoa.

In this sense, one of the most successful factories in Alicante is the company Chocolates Valor. A factory with more than 100 years of history and trajectory preparing the best bars of chocolate, chocolate cups, chocolates and pastry products.

This well-known multinational company, founded in 1881, was responsible for providing residents and tourists visiting Villajoyosa with this incredible museum. Without a doubt, a unique experience, especially for chocolate lovers.

Attend the Moors and Christians festivities

From 24th to 31st July we have the possibility to know and enjoy the Moors and Christians festivities. This is a special event that Villajoyosa celebrates every year and which in 2003 was declared an activity of International Tourist Interest.

It is a celebration with over 250 years of history in the culture of this town in Alicante, which has its origins in the attempt of the Berber pirates to disembark, prevented by the villagers in combat. In the celebration, the residents are in charge of recreating the historical event every July 28th. 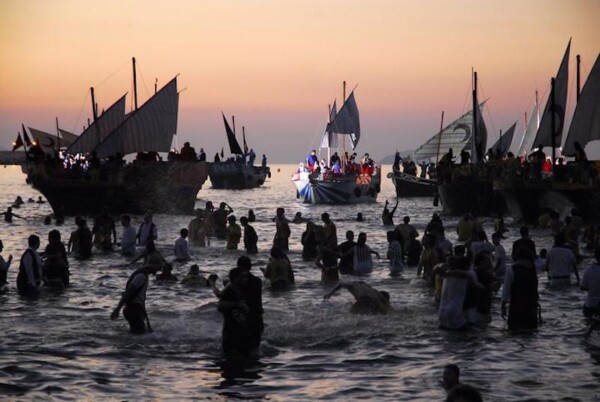 Finally, one of the best activities that we can find during our visit to Villajoyosa is its wide range of delicious gastronomic options. This beautiful town has a great fishing tradition which motivated the creation of the Gastronomic Villa by the Town Hall. Thanks to this, during the course of the year many culinary activities are held such as La Mostra de la Cuina Marinera, Xocolatíssima, Pebrereta Competition, Con G de Tapas and La Setmana de l’Arròs. 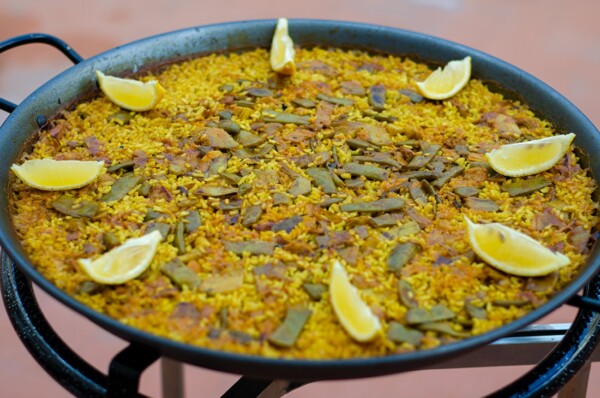 As we can see, Villajoyosa is an incredible tourist destination located in the province of Alicante, which offers us a great diversity of activities and places that we can visit with our family, couple or friends.

Alan Maclean
21:15 22 Feb 20
First expressions are everything. Honest Service. Rented for a week from calp office . There was no hidden rip off... fees which most tourists get stung by. Staff were friendly and made all clear . Even were good enough to drop car to hotel I was staying at (and picked up from) that saved me wasting any precious holiday time. Would reccomend and I'm sure i will use again. Thank you. ;) Aleer más

Svetlana Kukobat
14:11 14 Jan 20
We have a great experience with this company, everything that we asked we got if we come again to Spain we will book... Victoria Car.leer más

Tom Veitch
16:30 08 Jan 20
I've been renting cars in Spain for years and Victoria Cars has been the best experience...Reasonable prices, reliable... cars, no rip off rental tricks as petrol is full to full, minimum time from entering office to driving off. Wish the whole industry learnt from the Victoria Cars service.leer más

Michelle Powels
20:40 19 Oct 19
Excellent service. Car was delivered to the hotel with no extra charge and with full insurance.
Siguientes